I recently bought the 512MB iBall from Geil, a company perhaps better known for their high-performance computer memory. Labelled as a “GMV Player” (or “MPV Player” on some versions), it can play video files on its tiny OLED screen as well as acting as a simple MP3 player. I haven’t experimented with the video feature beyond watching the included sample clips, and I have to say that I wasn’t impressed with the quality. 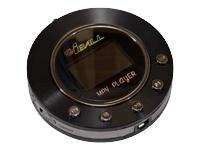 It looks fairly stylish and works perfectly as a standard MP3 player bar one somewhat major flaw – it won’t resume from where you left off if you switch the unit off and on again, so you end up having to skip the tracks you’ve already heard. This would probably have caused me to return the player if it wasn’t so cheap (£2.99 from the Overclockers B-Grade section, no more left unfortunately!).

The player also packs an FM radio no better nor worse than those I’ve seen bundled into other MP3 players and mobile phones, an e-book/text file viewer which allows you to view an impractical 24 characters at a time, a voice recorder whichÂ  haven’t experimented with, and a picture viewer which I imagine is of similar quality to the video player.

All in all, it’s a fun little toy but not what I’d consider a serious digital audio player. Much more details over at Dan’s Data, an independent PC hardware and gadgets blog which I recommend highly, by the way.

Today I needed to recover one of my FTP account passwords from FileZilla. If you find yourself in the same situation, there is a free tool available here which does the trick nicely, along with password removal/recovery tools for a whole host of other programs.

Nero 7 comes with the Nero Scout media library application, and I couldn’t find an option to not install it (or to uninstall it later). It adds an extra icon in My Computer, and presumably runs all the time consuming system resources. The fix seems to be to run the following command (from Start -> Run):

If you don’t feel the need to be reminded of your computer manufacturer every time you use the System or Performance Information & Tools applets, copy the following (italicised) lines into a blank Notepad document and save to your desktop as RemoveBranding.reg. Then double-click the file and accept the prompts to permanently* remove your manufacturer’s name and logo.

If you’d also like to hide the logo from the Welcome Center, rename the oobe.xml file (which you will find in C:\Windows\System32\OOBE\Info) to something else, e.g. oldoobe.xml.

* In case you ever want to restore the System/Performance Info branding, you should first back up the relevant registry keys. To reinstate the Welcome Center branding, simply rename oldoobe.xml back to oobe.xml.

If, like me, you’re contemplating switching mobile phone providers, here’s where you can check the network coverage of the five UK providers:

What I’d like to see is some sort of independent service that mashes up the data from all 5 sites and helps you decide which network is best for your needs.

I’ve just been doing some PHP programming and the following error came up:

Turns out that Paamayim Nekudotayim means ‘double colon’ in Hebrew and is the official name of the scope resolution operator. I guess it’s the PHP developers’ idea of a joke…

Anyway, the cause of the error in my case was a dollar sign missing from the front of a variable.

For anyone who repairs computers for a living or likes to tweak their own system, the PC Repair System is a must-have. It’s a collection of portable utilities for Windows PCs, complete with its own menu system and designed to fit on pretty much any USB stick you have lying around.

Head on over to Daily Cup Of Tech for the free download.