When attempting to log into my Tesco Bank savings account recently, I was greeted with a message stating that my browser – the latest stable build of Google Chrome – is unsupported: 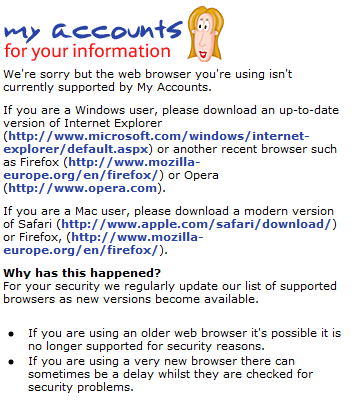 Tesco’s security concerns seem unfounded given that Google Chrome – which, incidentally, is based on same the WebKit rendering engine as Safari - was recently proven to be one of the most secure browsers.

Also, despite the site’s recommendation of a “modern version of Firefox”, I found that I was also prevented from logging in using the latest version of Firefox 3.6. Trusty (or should that be rusty?) old Internet Explorer 6 seems to work fine, and that’s not a particularly secure browser by any stretch of the imagination!

Strangely, I’m able to log into my Tesco Bank credit card account just fine with Chrome; it’s just the savings area that locks me out.

Fortunately the only reason I logged in was to withdraw my full balance ready to add to my 2010/11 ISA, but if I were looking to continue saving with Tesco, their short-sighted approach to browser support would certainly have me thinking twice.

My brother-in-law recently reported a problem with his Dell XPS M1530 laptop. When starting the laptop (using the power button), it displayed a greyscale Dell MediaDirect logo for a few seconds, then a Blue Screen of Death relating to a Plug & Play driver.

When I restarted while holding F8 in an attempt to access Windows Vista in safe mode, the boot menu showed only “Windows XP Embedded”, and booting into safe mode just resulted in another blue screen. This is when I began to suspect the MediaDirect feature, which allows users to view media such as DVD movies without having to boot into full Windows.

Sure enough, when I powered off the machine and pressed the “Home” logo button, the laptop attempted to boot into MediaDirect (with a colour logo) and showed the same blue screen as before.

I did some research online and ended up finding a download for a MediaDirect Repair boot CD. This appeared to run successfully, but actually didn’t help. Now when I booted up, I just got a black DOS-type screen with the text “2 active partitions” in the top left-hand corner. It looked like the repair CD had somehow corrupted the partition table by setting two partitions as active – not good news!

Fortunately, I found a forum post by a user of a different model of Dell laptop running Windows XP. This inspired me to try the Vista recovery CD (you can also use your original Vista installation CD if you have it to hand), running the BootRec /FIXMBR and BootRec /FIXBOOT commands as detailed in this knowledge base article.

This fixed the issue and the laptop was now able to boot into Vista as normal.

I then tried my luck with powering off the machine and booting into MediaDirect using the “Home” button. Unfortunately this brought the system back to its earlier, broken state, and turning it off and on again using the power button revealed that I wasn’t able to get back into Vista!

I repeated the BootRec steps and this got the system working once again. Further research showed that Dell have released a new version of MediaDirect which removes the “dual boot” functionality, so I can only imagine they’ve had quite a few problems with it!

I returned the machine it to my brother-in-law with instructions not to touch the Home button for the time being, and to try installing the new MediaDirect software. I’ll report back when I hear the results.

I recently purchased a hard drive from Scan.co.uk – one of their Today Only specials. At checkout, they automatically add Scansure Protection - an insurance policy which protects against installation damage. This is a bit sneaky, and because I wasn’t really concentrating, I neglected to remove it. It only cost me £2.30, but that’s money wasted as I have been building my own machines for years now and it’s unlikely I’d damage the drive. Unfortunately, from browsing the Scan forums, it seems that it’s impossible to cancel Scansure after going through with the order.

This experience probably won’t stop me buying from Scan in the future, but I’ll certainly be more careful. Ideally I think Scansure should be opt-out rather than opt-in, or at the very least there should be an option for registered users to disable Scansure permanently on their account.

I have been using Gmail since its early invite-only beta days in 2004. As explained by Google, they were involved in a dispute over the use of the Gmail name in the UK, so they were forced to rebrand the UK service to Google Mail in 2005. Existing UK users were allowed to keep their @gmail.com address (although the logo on the Gmail interface switched to the new Google Mail logo), while any new customers were assigned a @googlemail.com address.

Fast forward to today and it appears that Google have reached a settlement, as they have rebranded back to Gmail in the UK. Effective immediately, new UK users will again be able to sign up for @gmail.com addresses, while existing users will be able to choose whether to switch or to keep their old @googlemail.com addresses. The Google Mail logo will also be phased out and replaced with the Gmail logo.

This doesn’t really mean much in the grand scheme of things, as whether the “official” email address (as displayed in the Gmail user interface and in the From field of all sent emails) is @gmail.com or @googlemail.com, the domains are actually interchangeable, but it’s still a good step forward which will eliminate a lot confusion.

The only country in which the Google Mail brand now exists is Germany, where there is an ongoing dispute between Google and the owners of German company G-Mail. Maybe Google will now look to resolve this and be able to offer Gmail as a truly global brand.

At work, I recently needed to edit a database connection string in an Excel spreadsheet. Unfortunately the macros were password protected, the person who wrote the spreadsheet left the company some years ago, and we had no record of the password.

Luckily, thanks to a post on David Bugden’s blog, I discovered that it’s simple to circumvent VBA macro password protection without having to purchase a commercial utility such as Passware’s VBA Key.

The hex editor method worked for me in Excel 2003, although I’m not sure whether Microsoft have beefed up the security in 2007 and later versions.

If you want to remove the password used to protect/unprotect worksheets and workbooks, there is some information available here.