Here’s a video review of Big Rigs: Over The Road Racing, widely considered to be the worst game ever released.

The official Orange Wednesdays app is now available free from the iTunes Store. You don’t need to be on Orange to use the app’s basic functionality (showtimes, reviews and trailers), and customers of Orange’s mobile or broadband services can also obtain free 2-4-1 cinema ticket codes through the app.

To prove that you’re an Orange customer, you need to enter either your broadband username or mobile number (unless you are using your iPhone on Orange, in which case this step isn’t necessary). If you go down the broadband route, Orange checks that you’ve entered a valid username. If you provide a mobile number on the Orange network, you will receive a text message with a unique PIN, which needs to be entered into the app to unlock the 2-4-1 functionality. 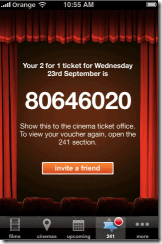 This is great for me, as my iPhone is on O2 but I also have an Orange phone supplied by my employer, which is only switched on when I’m on call. Previously I had to send an SMS to the 241 number to get my code (at a cost of 35p) and take my work phone to the cinema. Now I can request Orange Wednesdays 2-4-1 codes without even needing to switch on my work phone. Result!

Browsing around Tesco on my lunch break today, I picked up a Standby Saver for £20. I’d seen it pitched on Dragons’ Den, and the box boasts of an average electricity saving of £37 per year, which seemed like a decent enough saving given the price of the unit.

At first glance, the Standby Saver looks much like any other 6-way power adaptor. Closer inspection reveals a small headphone-like socket (into which connects the supplied infrared receiver), an LED and a recessed push switch.

The first thing to do is unplug your devices (for me, the TV, Freesat box, PS3, Wii, CD player and amplifier) from the mains and plug them into the Standby Saver. At this point I should mention that two of the six plugs are switched, so you can use them either as “mains” (e.g. for a Sky+ box or DVD recorder which obviously must remain on to record programs) or “standby” which means that, like the other four sockets, they will be powered down when the Standby Saver is in “standby” mode.

The next step is to plug the unit into the mains, switch it on at the wall, wait a few seconds, then and then push down the recessed “mode” button (the setup guide advises against using anything metallic, which is probably good advice as you’re fairly close to mains electricity – I went for a matchstick) until the LED turns red. Then point the remote at the supplied IR receiver, press the button on your remote (I chose the standby button on my TV remote) twice to set the “on” command, and then press the “off” button (I again went for the TV “standby” button, although you can use different commands for on and off if you wish). And that’s it… theoretically!

Unfortunately I had some problems getting started, which required a visit to the Troubleshooting section of the Standby Saver website. The instructions don’t mention this, but the LED was green when I first switched the unit on (it shouldn’t be illuminated at all) meaning that I had to follow the eight-step guide from the website before I was able to perform the above setup process successfully.

Once the setup is complete, the devices plugged into the four main switches (and either of the two switched ones, if the switches are in “Standby” position) should be completely powered off (as if they were unplugged from the mains). I pressed the Standby button on my TV remote and my devices sprung to life. Pressing Standby again powered everything off. Simples!

I found that “power off” can be a bit finicky – my TV (a Samsung 32″ LCD) reacts to the “standby” button before the Standby Saver, so if I don’t hold down the standby button for long enough to power everything off, the TV goes into standby and everything else stays on. A second push of the button remedies this though.

So, for those reasons, I’m out… no wait, I’m in… and I give the Standby Saver 9 out of 10. Despite the initial frustration in setting it up, it does what it says on the tin, although only time will tell whether it has made the advertised difference to my electricity bills. The two switchable sockets are a nice feature, and the Standby Saver’s clever way of “piggybacking” onto the signal from the chosen remote means that you don’t have to leave a “master” device (e.g. a TV) in standby at all times. A friend has a similar device that instead monitors the power draw of his LCD TV and when the the device believes the TV is in standby, it drops power to his connected devices. Unfortunately this means that if the screen goes dark for a few seconds due to whatever video source he is using, it drops the power!

I should point out that there’s also a USB version of the Standby Saver available, which I haven’t tried but appears to work in a similar way: instead of the IR receiver, it has a USB lead, which is plugged into your PC or laptop. When machine is powered off, the Standby Saver detects this and drops power to connected peripherals.

Here’s a faithful 38-voice a capella rendition of one of Michael Jackson’s hits:

I’m posting this here simply for my own reference because Domino’s don’t publish it on their own site – I often order online and don’t always have a menu to hand. Hope I didn’t make you hungry!

The Rock Band iPhone application is pretty good fun, but can be time consuming. Enterprising blogger Joe Bowers had a brainwave, and built a robot to play the game for him, saving him heaps of time!

Seriously though, this is an impressive bit of robot-building, and Joe has documented the entire build process from start to finish on his blog.

I just stumbled across a great blog, Cover Lay Down,which features folk-style cover versions of popular songs. Highly recommended, although if you’re anything like me you’ll be there for hours!

Mark Pilgrim discusses the history of the now-ubiquitous IMG tag and the controversy surrounding the way it has changed the web. 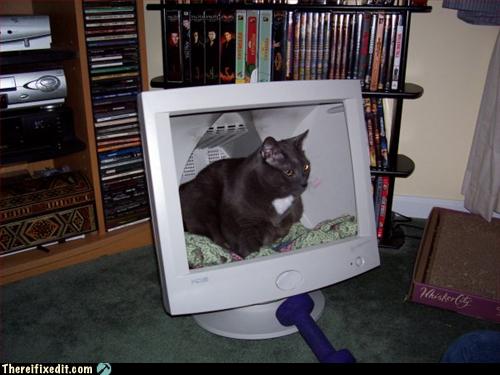 Here’s a useful tutorial for WordPress users wanting to move to a different domain. I’ve had to carry out this process a couple of times and although it’s not rocket science, it’s handy to have a step-by-step list to ensure the process goes smoothly.

This is one of a series of WordPress guides that cover a whole host of topics.