Opera Software have announced the worldwide release of Opera Mini, the full Web browser that runs on almost every mobile phone, including low- and mid-end handsets.

I’ve tried it, and I’m very impressed – it’s an improvement over the default browsers included on my Nokia 6100 and Sony Ericsson K750i – and it’s available as a free download. Go to opera-mini.com to find out more.

Here’s an amusing list of 26 types of programmers. Which one are you?

Advertising executive and blogger Hugh MacLeod gives his 30 tried and tested tips for being truly creative. Acknowledging that everyone is creative from birth, the article suggests ways of tapping into that innate creativity. 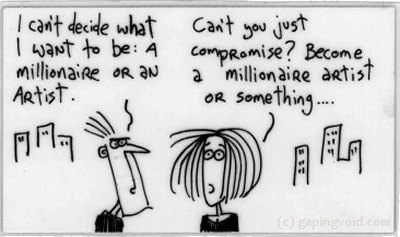 Warning: Slightly NSFW due to language.

Google has been known to roll out new features to a limited audience in order to test the water prior to release. Flickr user Mamster is one of these lucky people, and has posted a screenshot of a new design Google are considering. It’s not drastically different, but I quite like it. 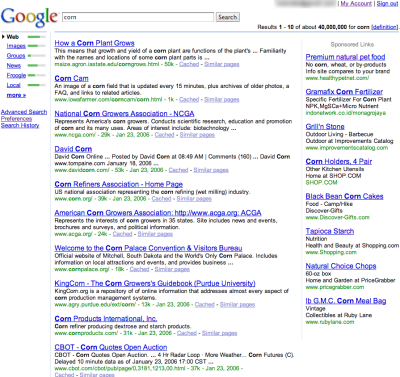 Tunatic “listens” to your music and attempts to identify it. I used it to find out the name of a song I heard on TV, and it managed to get it.

It actually managed to give me a title and artist for most songs I could throw at it, which is impressive considering services like Shazam charge 59p/song. Obviously it will only work when you are listening to music on (or near) your computer, but hey, it’s free. Tunatic supports Windows and Mac OS X.
Talking of music from TV, I’ve just discovered Harvey Danger. Their song Flagpole Sitta is the theme tune to Channel 4′s Peep Show, and the band have just released their latest album as a free download. It’s actually pretty good, and if you want to support the artists, you can buy the album on CD or send an online donation. The download is in DRM-free MP3 format, so you are not restricted to a particular operating system, software or hardware player.

And finally, I’ve also discovered an “electroclash” band called Client (thanks, Chris M!) Their music isn’t free, unfortunately, but I was interested to see that their site is powered by WordPress, a content management system used mainly for blogs like this one, but also capable of running full-blown sites such as Client’s.

Submerging your PC in cooking oil seems like one of the worst ideas ever suggested, but it’s been done by the guys at Tom’s Hardware. Turns out that oil is a pretty good coolant, and as it doesn’t conduct electricity, won’t short out your components.

The associated Digg story links to a few other people who have tried similar things. My personal favourite is this one – in my opinion, he’s done a better job by avoiding the gratuitous use of silicone sealant and employing mineral oil to improve visibility and presumably reduce the chance of the oil becoming rancid. I also like the airbrick which sends bubbles up through the case.

I’m interested in trying something similar – I replaced my graphics card today and stuck the old card’s fan in a pot of sunflower oil. When I powered it up, it started spinning as normal, although silently and a lot less quickly. I’m not ready to rebuild my main PC in a fishtank full of baby oil, but I’m tempted to drag an old junk PC down from the loft and see how it fares as a silent, oil-cooled system.

Note that it’s unlikely that you’ll end up with a completely silent system – certain components such as the drives and power supply are definitely best kept out of the oil – but you can at least reduce fan noise and maybe even improve cooling at the same time.

Obviously, experimenting with cooling-by-oil-submersion is not without its risks – there’s a chance that you’ll fry (no pun intended) your system and/or end up with a pool of oil on the floor – but you can certainly have fun trying.

I have a rather scary exam in Formal Software Development tomorrow morning, so am finishing my last minute revision this evening. Rather than bore you with the details, here are a couple of fun stories I found on Digg earlier today:

You can also use a similar technique to view the PHP and Zend logos, and the PHP credits.

My only concern about this bit of harmless fun is that it exposes sites running PHP, but there are lots of other ways of finding this out with a default PHP installation. If you want to disable this, and other “clues”, set php_expose to Off in your PHP configuration file (php.ini) which I assume also removes other “clues” (such as PHP-specific HTTP headers). But I say: use PHP, and use it proudly. :)

(via Digg) – note that the trick no longer works on Digg URLs – the server guys did the php_expose thing!

How to cheat at Windows Pinball

The author of this article has uncovered a cheat in the 3D Pinball game bundled with Windows XP that has lain undiscovered since XP’s 2002 release. By typing the magic words “hidden test”, you are able to drag the ball around the board and do some other cheaty things. What makes it more interesting, though, is his explanation of how he unearthed the elusive cheat using debugging tools.

Apparently it only works on the XP version of the game, not the previous version which shipped on the Windows 2000 disc. However, the XP EXE should run on any version of Windows from 95 upwards. (If anyone can confirm or deny this, let me know.)

Yesterday I was invited to Newsvine (thanks, Eric!), which describes itself as “a place where anyone can read, write and influence the news.” Lots of sites with similar philosophies sprang up in 2005; so what makes Newsvine different from, say, Digg or CommonTimes? 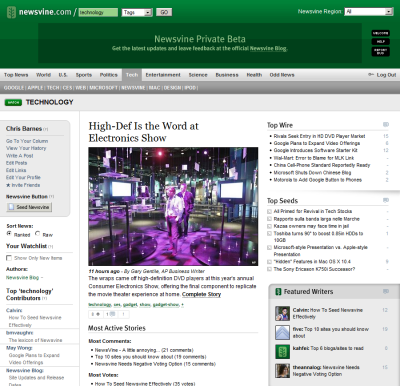 Unlike Digg, which only covers technology news, Newsvine welcomes news on any topic. In this way, it is more analogous to CommonTimes. The main difference I can see is that Newsvine is somehow affiliated with the Associated Press, whose stories provide the content for the “wire” section of the site. This is something which its competitors lack – each story must be manually submitted by users.Then there is the “vine” section, which is composed entirely of user-submitted stories. The act of submitting a story is known as “seeding the vine”, and users are encouraged to do this by dragging a button to their Bookmarks toolbar which they can click when they find an interesting site or story. Each user’s “seeds” are posted in their own “column” (like a blog, which is available at username.newsvine.com) as well as the relevant area(s) within Newsvine, determined by tags or keywords.
Perhaps the most novel twist, and something that no other “you make the news” community has tried before, is the notion of users getting paid to submit stories. The way it works is this – as a Newsvine user, you seed stories to build up your own personal column. Whenever someone views your column, you receive a share of the advertising revenue. This is not yet operational, is slated for release in time for Newsvine’s public launch.

My impressions so far have been good – the site is nicely laid out and attractively designed, and despite occasional slowness, seems to be scaling well. It’s a little US-centric at the moment, but this will improve as more international users join the site.

Newsvine is currently in private beta. I have a limited number of invites available – if you’d like one, leave me a comment.

Unfortunately, neither a CAPTCHA image nor a box to enter your result is visible yet, effectively disabling commenting until Digg’s programmers get around to finishing their implementation. This is most likely a case of test code being pushed to the live server prematurely rather than a deliberate attempt to prevent comment submission entirely. 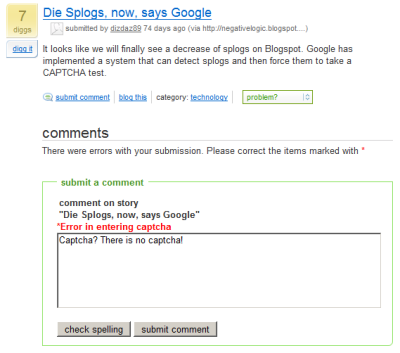 Update: Oops, it seems like story submission is broken too. Step 2 spits out a load of SQL before the normal page content; the rest of the submission procedure (including CAPTCHA verification) appears to complete normally, but the story is nowhere to be found in either the relevant digg area nor my profile.

Update 2: Looks like they’re fixing it as we speak. All pages now display “take a break, we’ll be back in 10. +digg”.

Update 3: Back to normal, just about. They’ve removed the CAPTCHA verification for comment posting, and story submission is working too (the story I posting during their “outage” has now appeared). The top search box on every Digg page isn’t working correctly – it’s showing a blank search form instead of the search results I’m expecting – but apart from that, everything’s fine and dandy.

According to this Ars Technica story, Google is putting together a suite of free Internet-related software to be distributed as a single installer. “Google Pack” is rumoured to include a customised version of Firefox, Adobe Reader, a Symantec antivirus solution, AdAware, Trillian and RealPlayer, along with Google’s own offerings.

This is not something I’d have expected from Google, and if pack.google.com didn’t lead to a Google Accounts login page for beta testers (somebody’s broken their NDA, perhaps?), I’d have dismissed this as a silly rumour.

For one, Firefox is the only open-source title on the list – everything else is free, but only as in beer.

The reasons for including RealPlayer, which is unpopular at best, and the Trillian multi-IM client, when Google have their own chat client, are speculated upon in the article.

I wait with interest for the official release of the big G’s new product, and can only applaud them for at least trying to promote alternatives to the ubiquitious Microsoft offerings. Hopefully they do the “right thing” and give users to option to install only the applications they choose.

Update: Google Pack is now available (public beta). You can customise the pack before downloading – RealPlayer and Trillian are not included by default, and Google Talk is also available as an optional extra.